Sometimes even big companies get it wrong

One of the first posts I wrote for this blog was "Things you say and do that IT hate". In it I had a little rant about terminology, like referring to your 'computer' as your 'hard drive' or referring to your 'monitor' as your 'computer'. This is not something that is limited to users, I noticed recently whilst watching an episode of Chuck on TV someone was talking about how many 'hard drives' they had to fix, referring to a pile of computers sitting there. (As a side note, I was a little bit surprised about this, I've found that particular show to be pretty careful about their terminology. They've managed for the most part to keep the 'nerd hurds' lingo fairly realistic -  at least in the early episodes)

Another thing that people often confuse is the difference between memory and hard drive space. I think this is more excusable, I don't expect my users to understand the inner workings of their computer and what each component does, especially these days when the lines between memory and hard drive storage is becoming a bit blurry (talking about hard drives with massive cache's or solid state hard drives - which are basically the same technology as silicon based memory)

Whilst traveling home from a holiday recently I noticed the below ad in an in-flight magazine: 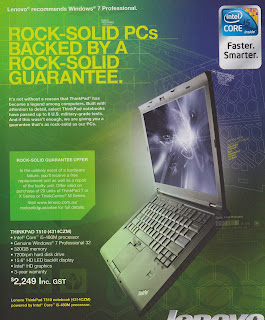 Now, at a quick glance you might not notice too much wrong with this advertisement (apart from the drastically overpriced laptop) but on closer inspection: 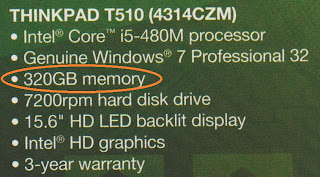 320gb of memory anyone ?? haha, I showed the wife expecting her to laugh and she looked at me like I was speaking German, which is probably how most of you are reading this right now. Seriously though, It would have been funny to order this laptop and then complain when it arrived with a 320gb hard drive and not 320gb of memory ... I wonder how their 'ROCK SOLID' guarantee would stand up to that complaint!
Ok, I completely realise that Lenovo know the difference between RAM and a HDD but still, you think with the money a company like that spends on advertising and marketing that this one shouldn't have slipped through the cracks.
I completely understand most people wont find this as amusing as me but felt like sharing anyway :)
For those of you celebrating it this week, have a great Easter. I hope you're getting a break!
Cheers, The ITG﻿
Posted by The IT Guy at 1:16 AM

Who is The ITG?

The IT Guy
I'm just a lowly IT worker who thinks too much.

I'll be tweeting post updates and from time to time short little IT Spiels that aren't substantial enough for a blog post.